For the first time when you hear that unique lilting accent of Kannada when you ask a man clad in his folded Lungi, seated at the shanty by the roadside, for some directions, a broad smile appears on your face. That’s the beginning of the Uttara Kannada district in Karnataka, you say to yourself. And as if on cue, the landscape around you has also changed. If you’ve been traveling from Belagavi, dotted by thick barked, deep green rain-trees and red topsoil, now the visuals shift to faint yellowish soil, dense forests, undulating terrain, misty mountains in the vicinity, and an unmissable smell of water-soil-forest that wafts through the air. Sniff hard, you’re in Uttara Kannada after all, the haven of plenty. This region is blessed with everything that one would need to achieve nirvana- plenty of trees and hence birds and wildlife, waters- with several waterfalls, rivulets, streams, ponds, rivers, and the sea; acres of teak plantation and varied flora that will leave you amazed.

Being placed bang in the middle of a cultural potpourri of sorts, Uttara Kannada shares its borders with Goa, Belagavi, Shivmogga, Haveri, Udupi and Dharwad districts. So you can enter this region from as many places. Now imagine, each of these districts has its distinct cultural and geographical identity, that just somehow seeps into the soul of Uttara Kannada. Just a few kilometers before Dandeli, you are greeted by a board that tells you you’re now in Sirsi region. The Uttara Kannada district offers you a plethora of sensory delights-

Add to it the benefits of all these places not being your usual touristy haunts- crowds, jostling for views and chaos all over. They are as quaint, serene and mostly untouched, as possible.

So you’ve checked almost all the tourist spots in India from your bucket list — the hills of the north, the seas of the south, the palaces, the forts, the temples and gardens alike — now what? Chances are you’ve missed out on a hidden gem like Uttara Kannada. With all its mesmerizing spots, this haven still remains off the beaten path and yet ever so alluring. The people and places redolent with stories, myths, legends and anecdotes, the cuisine awesome with the use of fresh local ingredients and the music, dance and attire of its own signature. The rivers Aghanashini, Bedti, Kali and Sharavati traverse as though in a hurry towards the sea, forming waterfalls and rapids on the way.

The Uttara Kannada trail can include several places, each very near to the other. So a small extended weekend can enable you to cover the mountains and the rivers to the temples and the sea, each with its own fascinating charm. ‘Lush’ is the only word that can describe this district in its entirety. Lush greens mountains, forests, gardens and backyards in people’s sprawling single-story homes. Hop on to check what you have missed so far

Embark on some serious trekking with expert trekkers to see rain forests, evergreen trees of the western ghats- some with massive barks that stand testimony to hundreds of years of fruitful existence. Catch glimpses of wild cats, birds, panthers, gaur, elephants, bears and foxes on the way.

The Kavala caves, the mysterious looking Syntheri rocks, the rock at Yana- featured in several meaningful films, beckon you on the way. Enjoy the heritage dance forms of Yakshagana, the Siddi dance accompanied by the beats of the Chande and the Maddale (percussion instruments).

Savor the local cuisine infused with the flavors of the coconut, rice, kokum and the spices with Holige, steamed Kotte roti, Patrode and Neer Dose (thin, paper like dosa prepared on leaves) that bring alive flavors of nature’s bounty.

Uttara Kannada district has maintained its sparkling beauty with the efforts of the administration and more so with the hard-working and warm-hearted populace. Several places offer excellent travel and accommodation arrangements suitable for the entire family, which make the entire holiday experience comfortable and enjoyable. 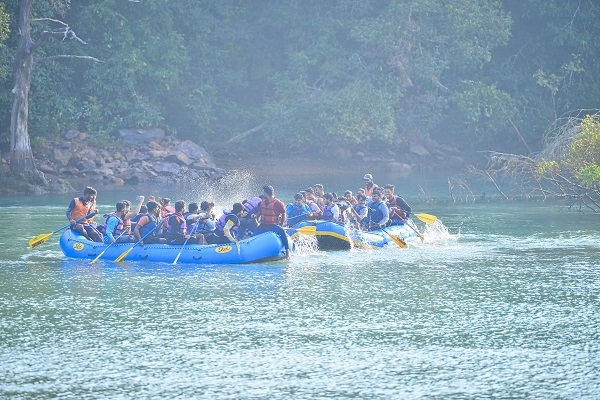